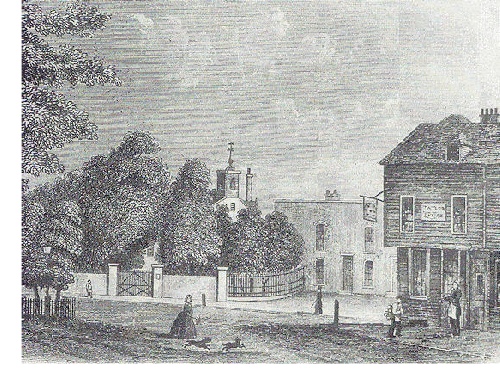 When Harriet Briscoe gave birth to her seventh child on 12 July 1843, she must have been relieved to find she had borne a son: of the children she and William had already produced, the only boy, William, had died in infancy in November 1838. Even so, her happiness was tempered by the thought that there was now another hungry mouth to feed.

John was born at Hink’s Yard in Bromley-by-Bow, one of many yards and alleys situated off the main thoroughfare where the sun’s rays rarely shone. The area had been home to the Briscoe family since about 1830, but despite the industries springing up along the River Lea, John’s father found it difficult to secure work and John’s childhood was spent in poverty. The birth of other siblings put further strain on the family’s finances, and by the age of six, John was an inmate in Poplar Union Workhouse with his mother and siblings. It was a far cry from the genteel image suggested by this engraving of 1832 showing Bow High Street and the Seven Star Inn.

Child of the parish

John’s name, and those of his siblings, appears in the Workhouse school register; John’s name is the last entry in the extract below. The symbol ‘∫’ indicates ‘good’ behaviour, although other pupils were not so well-behaved and the register contains comments such as ‘locked up for throwing his bread at the man in charge’ and ‘locked up for rioting in the dormitory’. 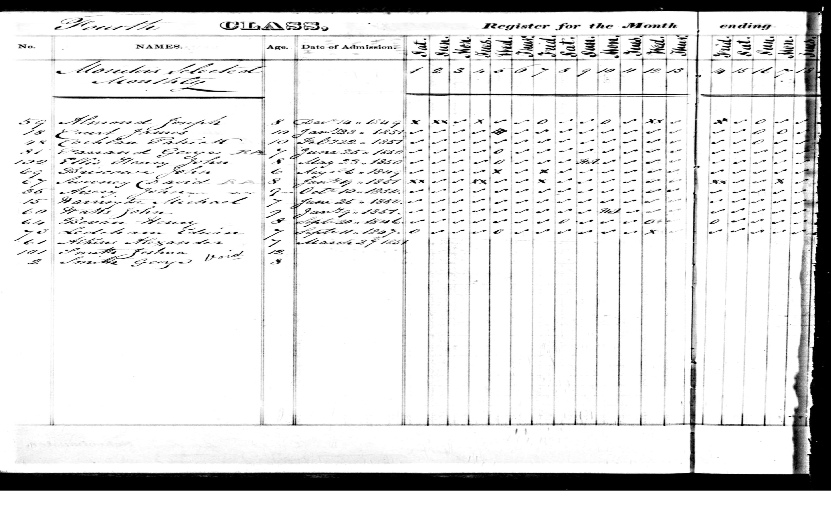 The comments made by the schoolmistress, Abigail Roberts, show a kindness and a compassion not often associated with the workhouse, and her scathing comments about the Master shows she was not afraid to express her concerns:

‘Great difficulty in keeping the children clean owning to the inefficiency of the Master and the very dirty state in which the new children are sent to the school.... but am told by him [the Master] it is my own duty to make the children clean.’

‘Conduct of children good, but the domestic arrangements and the children’s little ailments are much neglected, unless I am always present. I cannot go on any longer this way and shall lay it before the Board if there is no alteration.’

The Victorian workhouse has the reputation of a veritable prison which people entered only to leave in their coffin or, like Oliver Twist in Charles Dickens’ novel, to a harsh employer. Whilst this was the case for many people, it was not always so. People were free to leave at any time — provided they applied and changed out of their workhouse clothes into the clothes they had arrived in — and many people came and went according to their circumstances. John left the Workhouse on Easter Sunday 1851 together with his family; either his father had managed to find a steady job or John’s elder sister, Elizabeth was able to help. Curiously, John is recorded as an inmate again for the four days from 31 August 1854 to 4 September 1854.

The family took whatever work they could find and the 1861 census shows John’s mother earning money as a washerwoman. His siblings, Lucy and Alfred, were working in a match factory which was both poorly paid and dangerous, whilst John’s brother Charles was labouring in an iron foundry. John, on the other hand, was listed as having ‘no occupation’. It did not bode well.

Life carried on with the family managing to make ends meet. By the Spring of 1866, John had met Susan Webb. Although only about twenty years old, she already had a young child and was without a husband. Her daughter, Mary Ann, had been born on 24 March 1864 and baptised in April at the Church of St Mary, Bromley-by-Bow. The baptism entry shows that the name ‘John’ was scored through and the words ‘needle woman’ were entered for ‘occupation or profession’. It suggests that John Biscoe was Mary Ann’s father, but clearly he and Susan were not married and he may not have been present at the baptism. 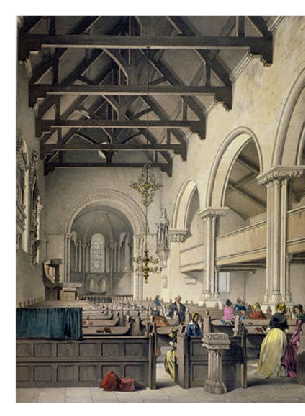 a boy whom the coupled named Thomas, but it was only on 1 April 1868 that John and Susan took him to the Church of St Mary where they presented themselves as ‘John and Susannah Biscoe’, although there is no evidence that they ever married. Another child, Sophia, followed on 30 July 1869 whilst John and Susan were living at 9 Oliver Court.

Between August 1869 and April 1871 John and his family moved to 29 Franklin Street, one of many streets that were built south of Priory Street from the 1860s. Numbers 19 and 20 Franklin Street are pictured below in the late nineteenth century; a comfortable house for a modest-sized family, but John and Susan had a boarder and were sharing the house with two other families, and so were most likely living in one room. It was not uncommon. John was working as a labourer and Susan was supplementing the family’s income with her sewing.

A few years later in 1874, the family moved to ‘Wesley House’ off Bromley-by-Bow High Street. Unlike Franklin Street, which was relatively newly built, Wesley House had been built more than 250 years earlier and was a wooden-framed, timber clad house. It was here that Susan gave birth to a daughter on 22 April 1874. She was named Elizabeth but was known as ‘Betsy’. The following year, on 27 March, John and Sarah’s five-year old daughter, Sophia, died of dropsy (oedema). 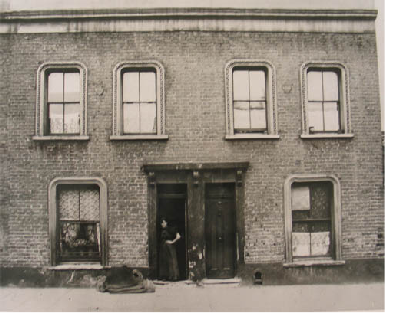 By November 1878, John’s common-law wife, Susan, was living at 4 Bird-in-Hand Court just off the High Street with Charles Catley, the son of a chemical labourer employed at the colourworks which was installed in the ‘Old Palace’ in Bow High Street. Did John leave Susan or did she leave him? In future years, Susan called herself Susan Catley, and her children — even those by John Biscoe — were listed on the census return as ‘Webb’ - perhaps an indication that she wanted to forget about her life with John. 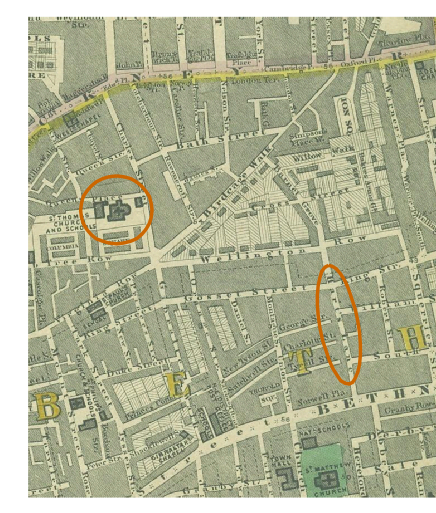 one of many people who left the town and headed to London in the 1870s. She settled in Bethnal Green and in 1878 was living at 8 Harts Lane, a few doors from John.

During the time John and Sophia spent talking to each other in the street or on the doorstep, how much of his past did John recount? Whatever the answer, John and Sophia were married on 20 October 1878 at the Church of St Thomas in Bethnal Green. The bride had little, if any, family in London, but John’s family attended the wedding and John’s brother and sister, Alfred Biscoe and Elizabeth Nash were witnesses. Both John and Alfred were able to sign their own names, no doubt a result of the two years they spent in Poplar Union Workhouse; the bride and Elizabeth Nash made their mark. The marriage register also shows that John had not been idle and was now working as a slater, a skilled job and a step up from his days as a general labourer.

Bethnal Green was one of the poorest parishes in London. The map on the right, dating to 1862, shows the density of Bethnal compared to Bromley-by-Bow, and not long after their marriage, John returned to the familiar turf of Bow. Gandy Court was located on the south side of the High Street and backed onto Oliver Court where John’s family was living. Susan Webb, who was now calling herself Susan Catley was living nearby with Charles Catley at 66 High Street (where her mother had died in 1878). 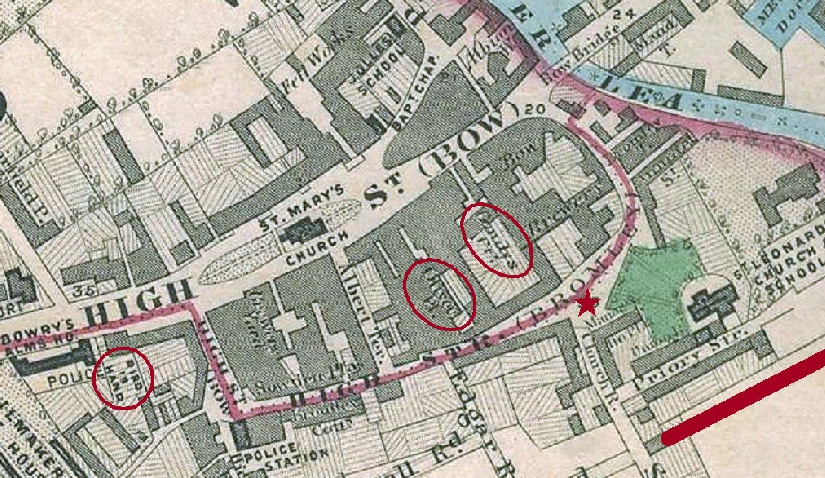 By 1891, John and Sophia had left Gandy Court, moving the short distance to 758 Old Ford Road, which ran north west from the High Street following the course of the River Lea. Although only 25 years old when she married, Sophia and John do not appear to have had any children; certainly none were listed in either the 1881 or 1891 census.

During this period, Sophia, who had given her occupation in 1881 as a tailoress, no doubt worked from home to supplement her and John’s income. John died sometime between 1891 and 1901. Considering how often the ‘Biscoe’ name had been misrecorded over the years, it is not surprising that the register of his death has not been located, particularly as Sophia Biscoe, with her Suffolk accent, was likely to have been the informant. After his death, Sophia continued to live at 758 Old Ford Road, taking in lodgers and sewing. She died in 1905.

Find out more about the Workhouse 