When Mary was born in about 1782 to Stephen and Ann Ducro, George III was on the throne; Britain was at war, not with her old adversary, France, but with her most troublesome colony, America; the Prime Minister, Lord North, had just stepped down after a vote of no confidence; and the first convict ships would not leave Portsmouth for Botany Bay for another five years.

Mary was born in Whitechapel, just south of Spitalfields, the Whitechapel Road separating the two parishes. Although the population of London had increased, it was still under a million, and Spitalfields, although densely populated, marked the north eastern limits of the City.

It is difficult to know her family’s situation, but they were certainly able to provide Mary with a basic education. As her mother, Ann, could not write, Mary may have been taught by another relative, or she may have attended the Charity School in Red Lion Street: established earlier that century, a new school building was erected in 1782 and admitted all children between the ages of eight and ten whose parents resided within half a mile of the school; no fees were charged.

As well as gaining a basic education, Mary learnt to weave from a young age. Although  her father was a bricklayer, some of her family and many of her neighbours were weavers. It was not unusual for children to start learning to weave from as young as six or seven. Mary first learnt to wind or quill the silk, then pick the silk and pull the warp on the loom beam. In later life, Mary described herself as a ‘silk warper’ - that is the person who set the up and down threads on the loom ready for the shuttle to be passed through them and the cloth to be woven - so may not have worked the loom itself, although no doubt she would have been able to weave a plain piece of cloth. In the Summer of 1804, Mary and her parents were living in Phoenix Street when her father died. Fortunately, her mother had income from an independent source and was able to sustain the family. A few years after her father’s death, Mary met Charles Steward, a local carpenter; perhaps he had been an acquaintance of her father’s in the building trade. They were married on a Monday, 3 September 1810 at Christ Church. Both bride and groom signed their names. The engraving below shows Christ Church in about 1815.

Over the next thirteen years, Mary gave birth to eight children, about one every two years, followed by twin boys in February 1823; they died before they could be baptised and were buried on 10 February 1823 at Christ 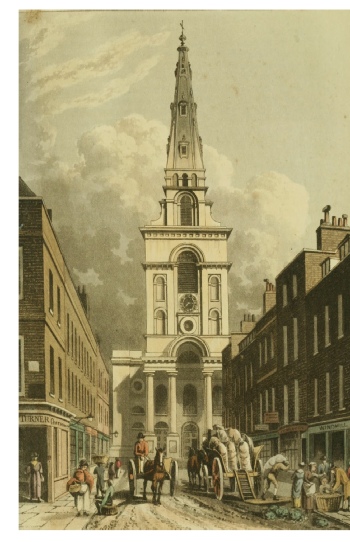 Church. During this time, Mary and her family were living at Crown Court, situated in the area behind Quaker, Wheeler and Phoenix Streets.

Until 1815, Britain had been at war with France and French imports, such as silk, were banned. Once the war ended in the Summer of 1815, conditions declined rapidly for the weavers of Spitalfields. Indeed, so great was their suffering that on 26 November 1816, a public meeting was held at the Mansion House for their relief. It was stated that two-thirds of weavers were without employment and without the means of support, that “some had deserted their houses in despair unable to endure the sight of their starving families, and many pined under languishing diseases brought on by the want of food and clothing”, and that the distress among the silk weavers was so intense that “it partook of the nature of a pestilence which spreads its contagion around and devastates an entire district.” It was during these difficult conditions, in February 1824, that Mary’s husband, Charles died leaving her with six children.

Mary’s mother, Ann Ducro, who had been widowed since 1804, came to Mary’s aid and mother, daughter, and the six children (five girls and one boy) lived together. By the 1841 census, Mary, her mother and her two unmarried daughters, Mary Ann and Ann Martha were living at 2 Wilkes Street (previously Wood Street) in Spitalfields (Eliza and Esther had married in 1839, and Sarah Ann had left home to work as a cook). To supplement Ann’s income, the three Steward ladies carried out work at home: Mary Ann was a dress maker, and Ann a straw bonnet maker. Mary continued to work as a silk warper, although between 1824 and 1835, the number of looms in operation fell by two-thirds and wages dropped by a third, from about eight or nine shillings to no more than seven shillings and six pence a week; the photograph below shows the garret of a house in Fournier Street (formerly Church Street), the notches in the beams indicating from where the looms would have been hung.

In 1845, Mary’s mother died and presumably her ‘independent means’ with her. In 1851, Mary and her daughters, now 39 and 34-years old, were living on the north side of Browns Lane (renamed Hanbury Street in 1876). The houses in Browns Lane had been 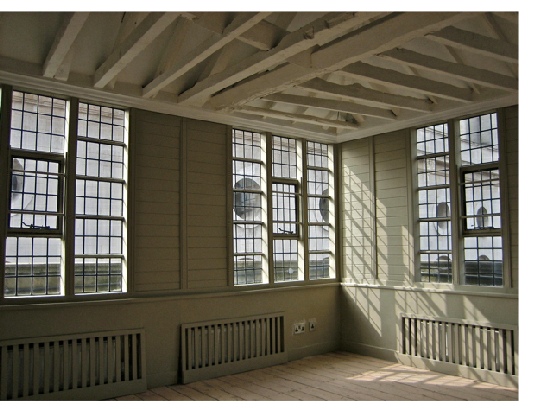 built the previous century and were single-fronted three-storey buildings with a roof garret, each storey consisting of two rooms. Also living at number 25 were two dressmakers, slipper makers, shoe makers, stay makers and a baker — in all 14 people making up six families: one family to a room — so Mary’s financial situation, like the area, had deteriorated. Neighbouring 29 Hanbury Street became infamous 30 years later when the mutilated body of Annie Chapman was found by the doorway of the backyard; she was the second victim of the serial killer who became known as ‘Jack the Ripper’.

A decade later in 1861, life had not altered greatly for mother and daughters, and the three ladies were still living at Browns Lane, which was as crowded as before. Mary and her daughters continued to support themselves, but by 1871, Mary, now in her eighties, was unable to work and was suffering from the effects of old age to the extent that her daughters could no longer care for her. As milliners, Mary Ann and Ann Martha did piece work and were paid by the number of bonnets and hats they produced or trimmings they sewed. It meant long days hunched over a needle or plating straw. There was no alternative but for Mary to apply for admission to the workhouse. She went to St George’s Workhouse in Princes Street, St George in the East, and was an inmate there when the census was taken on 2 April 1871. On 17 June of that year, Mary was admitted to the Infirmary suffering from ‘senility’. She remained in the Workhouse for a further two years, dying on 4 July 1873 from ‘senile decay’. She was 90 years old.