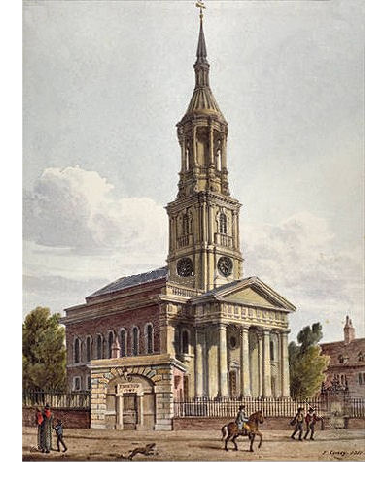 George was born on 21 November 1818 in Holywell Lane, Shoreditch, the second child of James Bostock and Marie Antoinette Wicks (Wix). A few weeks later, like so many of the Bostock infants, he was baptised at the Church of St Leonard, although his surname was entered into the baptism register incorrectly as ‘Boaster’. The church is shown in the illustration on the right at about the same time of George’s baptism.

At the time of his birth, Shoreditch and the Hackney Road, like much of England, were in a state of transformation: there were still watercress beds by Hackney brook and London was connected by a stagecoach link which ran from Bishopsgate. But many of the seventeenth century mansions were being converted for use as almshouses, private schools and charitable institutions, such as the villa acquired by the British Penitent Female Refuge to reclaim and resettle prostitutes. The completion of the Regents Canal in 1820 signalled the real beginnings of change, confirmed by the inauguration of the omnibus service in 1838 and the construction of the North London Railway in the 1850s.

George’s father was bright and ambitious, and he seized the opportunities such growth presented. Financially, he was doing well and the young George did not lack the necessities of life, including a basic education which meant he was able to read and write. What he did lack was a peaceful and loving home. His parent’s marriage was not a happy one, and his father’s business occupied much of his time. When George’s elder brother, James, died some time between 1818 and 1830, George was left an only child with a near-absent father and a sharp-tongued mother. 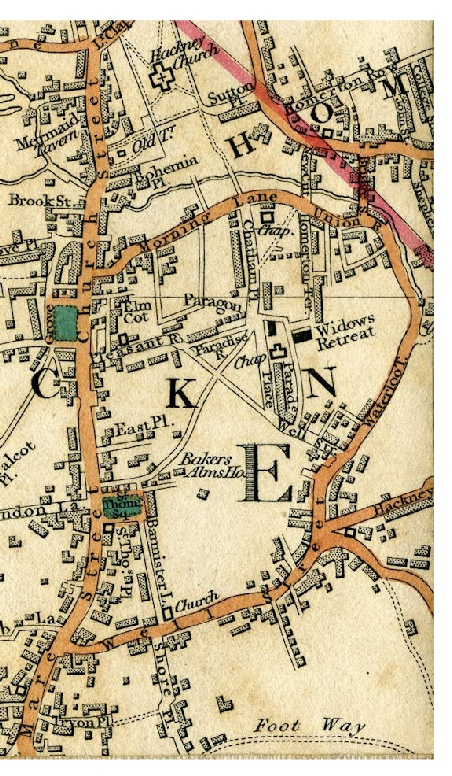 In May 1830, twelve years after George’s birth, his mother gave birth to another child, who was baptised, James. ‘Recycling’ names of dead children to ensure a family named lived on - in this case George’s father’s name - was common and would not have been seen as at all morbid. By the arrival of his sibling, his parents’ marriage had broken down and George’s father left his family to live with his wife’s relative (probably a niece or cousin), Sarah Homan.

James senior continued to take care of his family financially, and as soon as he was old enough, George began working in his father’s business; over the years, George described his occupation variously as stenciller, paper hanger and plasterer.

It was a difficult time for young George, living with his mother, yet working with his father and seeing him set up home and raise a family with one of his Homan relatives. The two families also lived in close proximity which only added to the tension.

But life goes on, and by the time George had learnt his trade, he had met Esther Steward. She was from a respectable family of artisans who had lived in Spitalfields for almost a hundred years. Her father, Charles, was a carpenter and may have been a business acquaintance of the Bostock family. George and Esther were married on 29 September 1839 at the Church of St John in Hackney, the same church where George’s parents had married in 1816. They were both living in nearby Mare Street at the time. The engraving below shows Mare Street in about 1840 looking towards the Church of St John (both locations are shown on the the map of 1837 above: Mare Street running up from the bottom of the map, and ‘Hackney Church’ at the top of the map).

After their marriage, George and Esther moved to his mother’s home at 5 Hackney Road. The ground floor was most likely a shop or workshop; another floor was rented out, leaving the Bostock family another floor of two rooms to live in. The photograph below was taken in May 2012 and, whilst numbering has changed since the 1800s, the building shown with the yellow-framed windows was probably numbers 4 and 5 or 5 and 6. 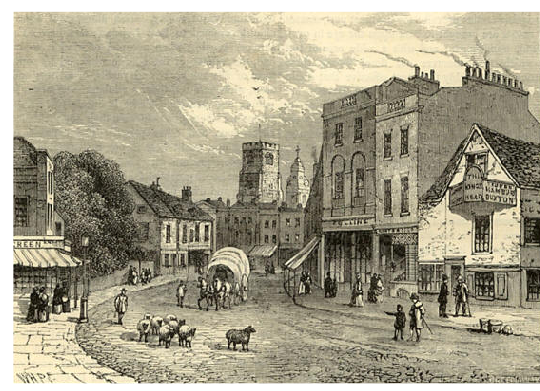 It was here that George and Esther’s first child, George Rowland, was born on 29 November 1840. A month later, on Christmas day, George and Esther walked the short distance to Church of St Leonard to baptise him. The Church, which stands at the junction of the Hackney and Kingsland Roads, was a visible and integral part of their lives; its chimes meant that they needed no clock.

In January 1842, George Rowland contracted whooping cough, a highly contagious disease which, together with measles, was one of the main causes of infant death in the mid-nineteenth century: between 1838 and 1840, 50,000 children died of these illnesses in Britain. George Rowland died on Friday 4 February, although it was not until Sunday 13 February 1842, that George and Esther walked the short distance to the churchyard of St Leonard’s to bury him. In the days before mortuaries and refrigeration, nine days between death and burial appears a long time, but it was not uncommon and, since the family were by no means poor, it is likely that burial waited until the next available Sunday. A report by Dr John Simon, from the City of London, in 1852 expresses anxiety over this practice:

“... the pro­longed keeping of dead bodies in the rooms of their living kindred ... in the poor man’s dwelling. The sides of a wooden coffin, often imperfectly joined, are at best all that divides the decomposition of the dead from the respiration of the living. A room, tenanted night and day by the family of mourners, likewise contains the remains of the dead. For some days the coffin is unclosed. The bare corpse lies there amid the living; beside them in their sleep; before them at their meals. Death perhaps has occurred on a Wednesday or Thursday; the next Sunday is thought too early for the funeral; the body remains unburied till the Sunday week. Summer or winter makes little difference to this detention”. 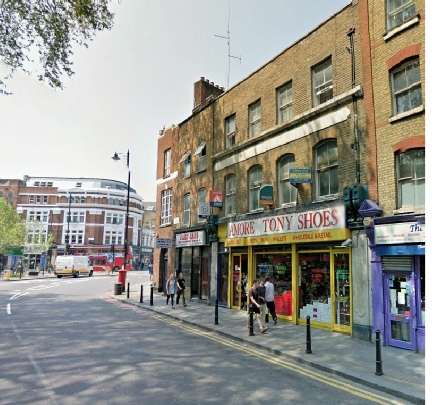 Later that year, Esther became pregnant, giving birth to a daughter in May 1842. She was named Marie Antoinette after George’s mother, and was baptised on Sunday, 21 May 1843 at the Church of St Leonard. Probably unbeknownst to George, in 1844 his father, James, made his Will. The Will was at great pains to divide everything equally between James’ wife, legitimate children, common-law-wife, and his natural children; they were to receive an equal share of the rents and profits from his properties, and each family the contents on one of his properties. However, James bequeathed the residue of his estate to his younger son, James. Perhaps James felt that his younger son would be in greater need of his father’s assistance; it may also indicate an unsteadiness of character on George’s part, or a rift between father and son. Given the circumstances of George’s upbringing, it would not be surprising.

For George, life carried on in much the same way, the everyday routine punctuated by more significant events, more often than not the birth of a child: Ann Martha (January 1845), James George (January 1847), Frederick William (January 1849), and Charles Edward (December 1850), all of whom were baptised at the Church of St Leonard.

As well as births, there were also the inevitable deaths. On the morning of Tuesday, 18 February 1851, George and Esther awoke to find their 13-week old son, Charles Edward, dead. Although such events were not uncommon, an inquest was held. In an era before the term ‘cot death’ had been coined, the death certificate recorded the cause as simply ‘found dead in bed without marks of violence’. Charles was buried on Sunday 23 February.

Later that year, Esther found herself expecting what would be her last child. On 31 May 1852, she gave birth to a boy who was baptised Edwin Francis; it was a name that would reoccur in the Bostock history for the next four generations.

The last journey to the Church of  St John 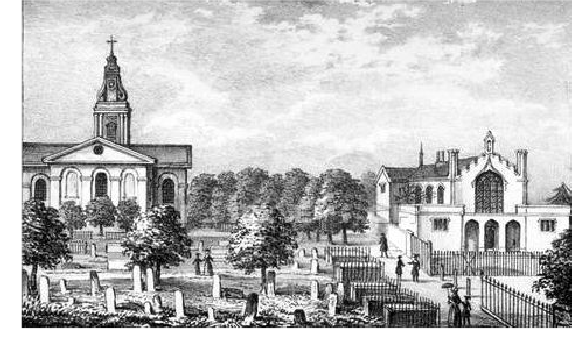 A year and a half later on 11 December 1853, George died at 5 Hackney Road; he was just 35 years old. The doctor recorded the cause of death as ‘syrosis — two weeks’ (sic). The two most common causes of cirrhosis are alcohol and hepatitis. Given the difficulties between George’s parents and the evidence of his father’s Will, the natural conclusion is that George drunk himself into an early grave. Unusually, he was not buried in the churchyard of St Leonard’s, where two of his children already lay, but in the churchyard of St John the Baptist, Hoxton, where he had been married 14 years earlier. He left his wife, Esther, a young widow with five children under he age of 10. But her part in the Bostock story is not yet done - click on the link below for details.