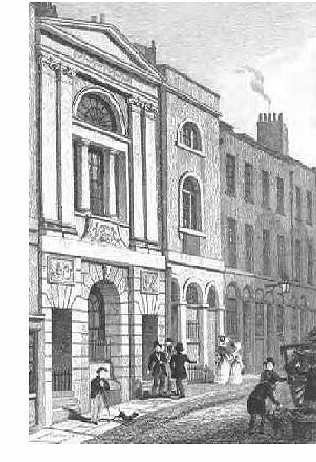 George Charles Moss was born on 20 February 1873 at 7 Ammiel Terrace, Bromley-by-Bow. Although the house had at least five rooms, even before George Charles’ arrival it was a noisy, crowded house with four siblings and his maternal grandfather and aunt living with the family. George was one of the first generation of children to benefit from the Forster Education Act of 1870 which laid the foundations of Britain’s education system and aimed to ensure that all children attend school up to the age of 13. George may not have viewed it as a benefit, but it ensured that he gained a rudimentary education and could read and write. As for his future, there was no debate; his father, five of his uncles and several cousins were lightermen, and a few months before his fifteenth birthday George was apprenticed to his father William. The binding ceremony took place at Waterman’s Hall on 11 October 1887.

In his book, Men of the Tideway, Dick Fagan recalled:

“a handful of names seemed to account for an astonishing number of lightermen. Also many lightermen had married daughters or sisters of other lightermen, so you had a great number of uncles and nephews and cousins sculling around, as well as sons, fathers and grandfathers. Often the family resemblance between relatives was striking .... You'd keep thinking you were running into the identical man at different parts of the river twenty times on the same day”.

Freemen of the river

The Mosses were typical of the family that Dick Fagan describes; over the years, George’s brothers William, Alfred, Arthur and Walter were bound as apprentices, and all gained their freedom apart from Arthur. Only two years after he was bound, George 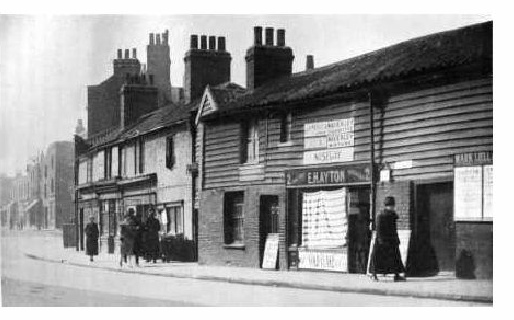 was a witness at the wedding of his sister, Ellen, to Frederick Richard Brown, a barge lighterman just a few years older than George. No doubt, Frederick had been introduced to Ellen by one of her brothers. The family ties were strengthened further in 1897 when George’s widowed father, William, married Susan Dodson (née  Brown), who was almost certainly related to Frederick.

These connections show the deep-rooted family ties that existed amongst lighterman, but Frederick and Ellen’s marriage had an even greater significance to George’s history. In 1891 Frederick and Ellen were sharing a house in Bromley-by-Bow High Street (pictured here in the early twentieth century) with Charles and Susan Catley and Susan’s daughter from a previous relationship, Betsy Biscoe (although she used the surname Catley from a young age). 90 High Street was a wooden house only two doors away from ‘The Seven Stars’, an ancient timber-built inn with an overhanging upper storey and gabled roof, built in about 1606. 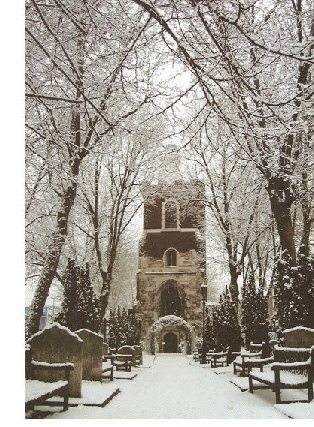 It is uncertain when George first met Betsy. It may have been at Ellen and Frederick Brown’s wedding in November 1889, although it could just have easily been at ‘The Seven Stars’. The young couple were clearly taken with one another and during the Summer of 1891 the 17-year old Betsy broke the news to George that she was pregnant.

Still only 18 years old, George was classed as a minor and, as an apprentice lighterman, forbidden to marry under his articles of apprenticeship. Fortunately, for George, he was apprenticed to his father so it was easy to bend the rules. Even so, George and Betsy waited until Christmas day 1891, when a heavily pregnant Betsy made her way down the aisle of the Church of St Mary (shown on the right). If their families attended the wedding, they did not act as witnesses; perhaps they were at home enjoying their Christmas lunch, unlike the unfortunate vicars who had already married twelve couples that day. Six weeks later on 6 February 1892, whilst George and Betsy were living at 21 Eagling Road (pictured below in the 1930s), Betsy gave birth to a daughter who was named Susan Mary Ann after Betsy’s mother. She was baptised a few weeks later at the Church of St Mary.

By now, George had obtained his two-year licence so was able to support his family until 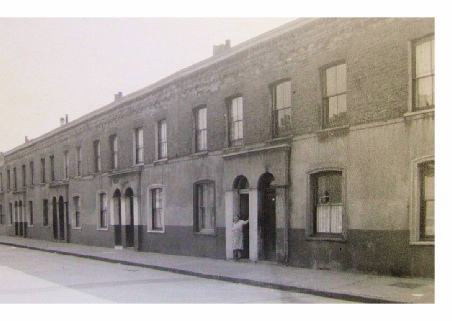 he gained his freedom on 3 November 1894, becoming a freeman of the River. About the same time, Betsy gave birth to a second child, Elizabeth Eliza, this time named after George’s mother. A third daughter, Maria Elizabeth, followed in March 1897. By 1898, George and his rapidly expanding family was living at 16 Hancock Road, and it was here that George’s first son, Alfred, was born on 15 May 1898.

During this time, George worked on the river and Betsy ran the house and raised the children. As a lightermen, George worked long days and often nights, dictated by the turn of the tide and the winds. At first, George and Betsy shared a house with George’s brother and sister-in-law, David and Emma, at 38 Marner Street. No doubt George and David worked together, and could leave the house knowing that Betsy and Emma were able to support each other. In his survey of London, Charles Booth categorised families in this street as poor with an average income of 18s to 21s a week. However, both George and David were earning a decent wage as lightermen, so that they were sharing a house was not an indication of financial difficulty. In fact, it was common: such an arrangement provided a network of support and company for wives and children when their husbands were absent. There was little sense of today’s notion of ‘personal space’ and no point renting a house larger than was needed, although the rate at which the two families were growing meant that both Moss brothers would soon outgrow this arrangement: on 15 July 1901, David’s wife, Emma, gave birth to a boy, David Albert; three days later, Betsy gave birth to a daughter, Betsy Elizabeth. Both children were baptised on 4 August at the Church of St Mary. 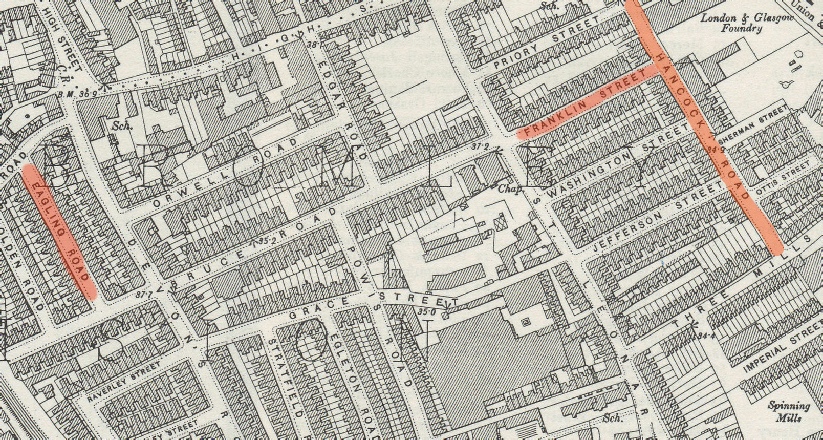 Early in 1902 Emma found herself pregnant again and David and Emma moved out of Marner Street. George and Betsy were still living at Marner Street in April 1903 when their son, Alfred, contracted measles. Measles is a disease of the respiratory system caused by a virus and is accompanied by coughing, fever and a runny nose. It is highly contagious and it is estimated that 90% of people living in the same space, and without immunity, will catch it. Alfred was admitted to The Sick Asylum in Bromley-by-Bow where he died on 13 April 1903. He was not the only casualty: Emma Lilly and Mary Ann, David and Emma’s daughters, also died in the Spring of 1903. Of the five children born to George and Betsy at this time, only the two eldest daughters, Susan and Elizabeth, had survived.

In about 1904, George and his family moved to 24 Devas Street, a few streets south of Ammiel Terrace. It must have been with relief and a sense of trepidation that George Charles, named after his father, was born on 18 June 1904, followed by Albert in 1907. Another daughter, Katie, was born in 1909. She was born with a cleft palate; today the condition c 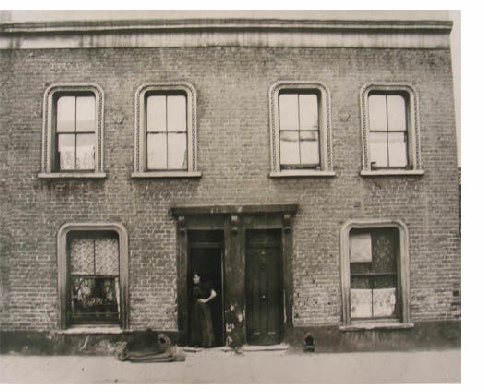 an be treated successfully, but in 1909 it would have been a cause of anxiety to George and Betsy. On the morning of 23 February 1910, Betsy found Katie dead in her cot. An inquest was held on 25 February 1910 which concluded that Katie had died of natural causes and had suffered a convulsion, caused by her difficulty in breathing due to her cleft palate.

By the time the night of the 1911 census, Betsy had borne eight children, only four of whom had survived. Coincidentally, George’s brother, David and his wife, Emma, had also lost four of their children: even for the time, the mortality rate was high. Just a month after the census, on 4 May 1911, Betsy gave birth to another son, William Ronald — their ninth child. Although still living in Devas Street, the family occupied only two rooms.

Towards the end of 1912, Betsy discovered she was pregnant. With her experience, one wonders how long it was until Betsy was able to break the news to George that she was carrying twins; Clara and Thomas Arthur were born in July 1913 brining the number of children she had borne to eleven, four of whom had died whilst children. By this time, the family was living in nearby Franklin Street. The photograph above shows 19 and 21 Franklin Street in about 1900, only a few doors down from the Moss household. A final child, John, was born in the Spring of 1917. 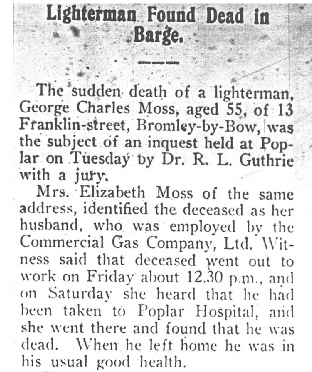 Despite the tragedies they had suffered, George and Betsy were better off than many of their neighbours. As a lighterman, George’s prospects were good and he nearly always had work, bringing home a good wage. In his later years, George worked as a lighterman for the Commercial Gas Company which owned Poplar Gas Works. On 9 November 1928, George left home just after noon for St Bride’s Wharf in Wapping, where he had arranged to meet Sidney Whitehorn, a friend of some 14 years, aboard the barge Ammonia. They left for Bow Creek at 2.35pm and arrived there after two hours rowing. Whilst waiting for the tide to subside they had a cup of tea and then rowed the barge up the creek to near Leven Road which ran next to Poplar Gas Works where they moored at around midnight. An hour later George put the barge into deep water. After resting for a while, he got up to check the weather and to go to

the toilet. At about 1.40am Sidney got up to check on him as he had been gone some time. He found him lying in the cabin. A police officer was called and George was taken to Poplar Hospital where Betsy identified his body. The lightermans’s log book records that George was ‘gassed in barge’s cabin’, although an inquest held on 13 November returned a verdict of ‘death due to natural causes’ brought about by a heart attack. The death certificate also gives the cause of death as ‘coronary thrombosis’. George was buried on 19 November at Tower Hamlets Cemetery; Betsy erected a headstone in his memory to which her details were added a 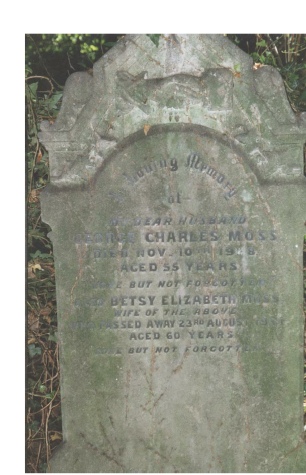 “In Loving Memory of my dear husband George Charles Moss

Also Betsy Elizabeth Moss wife of the above who passed away 23rd August 1934. ‘Gone but not forgotten’

Such a headstone would have been a luxury which few other working class families could have afforded. George may have saved during his life or it is possible that Betsy received a payout from the Commercial Gas Company. Although he did not leave a Will, the grant of probate shows that George’s estate was valued at £266 18s 6d — more than a year’s wages at a time when skilled labourers were earning about £4 a week, and an indication of how far George had come, at least financially if not in miles, from his own father who, only twelve years earlier had been buried with little fanfare and no lasting memorial to mark the spot.