The history of the Moss family begins with father and son, William and George — two names that flow through the Moss line. George was born in Deptford in about 1808, the son of William Moss. Deptford stretches south from the River Thames and when George was born it 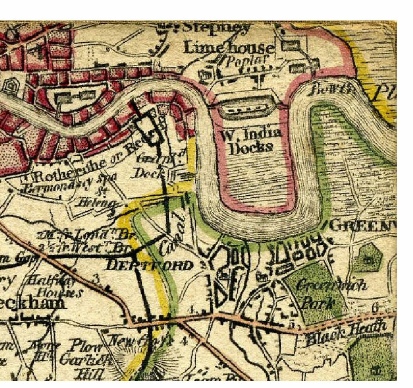 was a bustling area of trade and industry, and central to Britain in her war against France (apart from a brief respite in 1802/3, Britain had been at war with France since 1793). Closest to the river, the emphasis was on victualling and shipbuilding: wharves, warehouses, chemical works, soap and candle factories, sawmills, paintworks, coal and timber wharves, breweries, glue works, gasworks, tar distilleries, and manufacturers of artificial manure stretched along a narrow strip of the river filling the air with the sounds and smells of industry. Further south, life was a little quieter; Deptford High Street (or Butt Lane as it was called) was emerging from its rural past with a farm occupying much of the west side.

Nothing is known about George’s parents other than that, in 1839, his father was working as a bricklayer. The work was seasonal, but should have been plentiful: between 1801 and 1851 the population of London almost tripled as people migrated to the capital from the surrounding counties; large estates were built, gradually joining what had hitherto been separate villages into one urban sprawl, and by 1815 London was the largest city in the world.

As a result, George should not have wanted for the necessities of life, although in the early 1800s this did not include an education. In 1816 only about half of the children in Britain attended school or learnt to read and write; in 1835 the average duration of school attendance was one year. For most working class families, formal schooling was unaffordable and, for a child who would learn a practical trade or work in unskilled employment, it was also thought to be unnecessary.

It was common for sons to take up their father’s profession, but bricklaying was physically demanding and seasonal. Perhaps George was not suited for it or his family believed he could do better by another trade, so in the early 1820s he took up tailoring. He may have been formally apprenticed to a master tailor, his parents paying a fee and signing the legal agreement which apprenticed him for between five and seven years, or he may simply have worked for a  tailor for several years, during which time he would have been trained and may have been provided with board and lodgings by his master. The painting on the right shows the interior of a tailor’s shop in the late eighteenth century; the apprentices and tailors sit cross-legged on the workbench threading needles and sewing, and with the open fire and their mugs of ale the scene looks rather homely. Whatever form George’s training took, by about 1830 he was free to ply his trade independently. In official documents, he styled himself as a ‘journeyman tailor’ (journeyman derives from the French journee, meaning a day and signified that a person was paid by the day not that they travelled around). Gaining his freedom also meant he was able to marry.

Eleanor Evans and a change of scenery 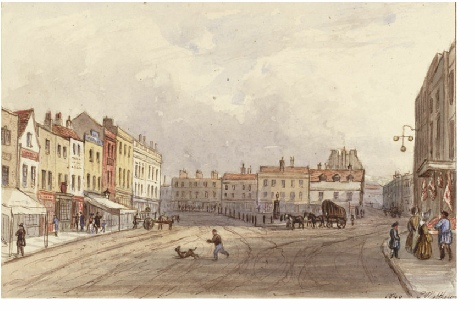 By 1836, George had met Eleanor Evans, the daughter of William Evans, a licensed victualler, and a local girl. In 1851, she described herself as a tailoress, so George may have met her through a shared acquaintance. Their son was born on 30 June 1837 whilst George and Eleanor were living above one of the shops that lined the Broadway, the bustling thoroughfare in Deptford. The illustration on the left shows the street at about the same time, although in 1837 it would have been busy with carts and horses, street traders, and people taking fowl and livestock to market.

Although the evidence is scant, it is likely that the child was not their first. The 1841 census (taken on 6 June) records two other children in the household: Eleanor Moss born in about 1831 and Emma Moss born around 1833. No baptism records have been found for Eleanor and Emma. They may have been George’s children, as George would have completed his apprenticeship in about 1831, or they may have been Eleanor’s children from a previous relationship.

A month after the birth of their son, George and Eleanor took him to the Church of St Paul to be baptised; a 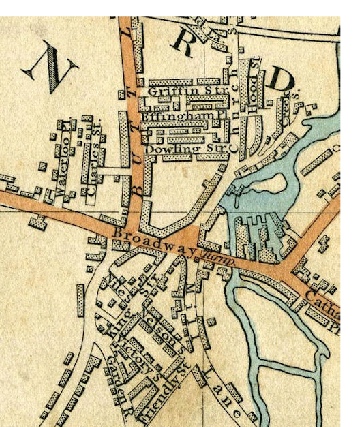 s was customary, they named him George after his father. Sadly, George did not survive long, dying in the Winter of that year. Perhaps it was this event that gave George the impetus to move his family from Deptford. It was a significant step for George, but particularly for Eleanor who had been born and raised in Deptford and whose family still lived close by, but by the Autumn of 1838 George and his family had crossed two rivers: the River Thames that divides London into north and south, and the River Lea that marks the East-West boundary between Middlesex and Essex.

George and his family settled in Stratford in Essex. Stratford, meaning a narrow ford, grew up at a place where the River Lea could be crossed. Because of its position on the old Roman road from London into Essex, it became a coaching stop for travellers. During the seventeenth and eighteenth centuries, industrial activities grew up along its banks including silk weaving, calico printing, the manufacture of Bow porcelain, and distilling. The rest of the area was made up of small agricultural hamlets and the large houses of city merchants, although by the late eighteenth century many of these had ceased to exist as wealthy merchants moved to more fashionable parts of London and the suburbs.

In 1838, the area east of Bow Common was still little more than a group of large villages; the engraving on the right shows Stratford High Street in about 1840, l 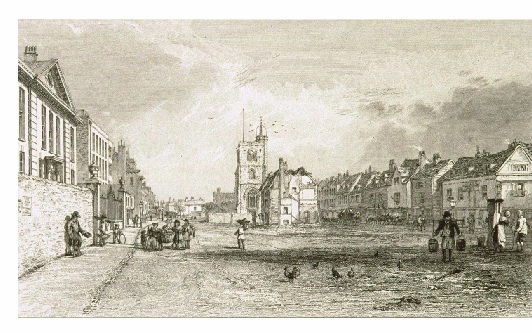 ooking not dissimilar to the painting of the Broadway in Deptford. But unlike Deptford, whose fortunes had peaked, the area east of the River Lea was growing rapidly and it may have been for this reason that George and Eleanor chose to settle there. Given the proximity of Stratford to Deptford — at least as the crow flies — they may have crossed the Thames by boat and made their way north through the Isle of Dogs, or perhaps they crossed the ‘new’ London Bridge, whose construction they had most likely witnessed a decade earlier.

George and his family probably went first to New Street, as it was here on 23 November 1838 that another son, named George Charles, was born. Even after the birth of their second son, George and Eleanor were in no hurry to marry. It was not until almost a year later on 13 October 1839 that they returned to Deptford to the Church of St Paul to be married. The church is one of the finest baroque churches in England and even today is an impressive and imposing landmark with its elegant steeple and semi-circular portico approached by a flight of stone steps. One wonders how George and Eleanor felt as they passed between the elegant Tuscan columns and stood before the altar with the figures of Saints Michael and Gabriel gazing down at them from the Venetian stained-glass windows.

From New Street, the family moved to Waterworks Row, a small terraced house near the waterworks (shown in orange on the map below). Not long after, Eleanor gave birth to a daughter, Rosetta. The following year, George moved his family to Brewers Row (possibly located in blue on the map). It was here that their daughter, Emma, died in June 1842 of inflammation of the lungs; she was eight years old. Her death certificate records that ‘Ellen Moss, daughter of Robert Moss, a tailor, died on 22 June 1842’ and that the information was provided by a Sarah Rose of 2 Brewers Row. T 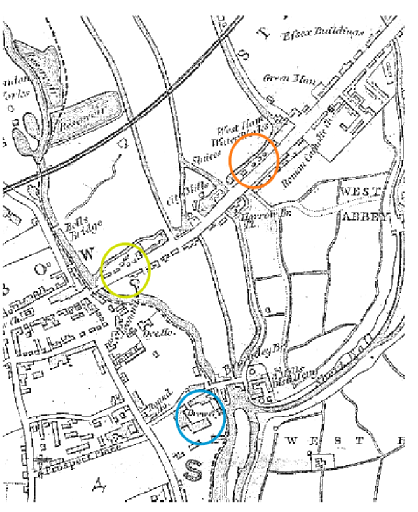 he following day, the certificate was corrected in the presence of Eleanor Moss to read ‘Emma Moss, daughter of George Moss, a tailor’. With such mistakes, it is no wonder that researching family history can confound even the most experienced genealogists.

The following year Eleanor gave birth to a son, named William after his grandfathers, and in 1845 to another daughter, named Eliza. Both William and Eliza were born in China Row (shown in lime green), close to the Bow Bridge. That the family had lived in three descriptively named Rows was no coincidence. These rows of terraced housing generally fronted the industries they described, offering low-cost housing, albeit often badly built. Whilst it was not uncommon for families to move regularly, since most families rented rather than owned their properties, it does suggest that finances were difficult for the Moss household.

George continued to work as a tailor and is listed in White’s Essex Directory of 1848. He was one of 26 tailors working in West Ham and was based on the High Street where he probably rented a small workshop. Whilst the Victorian era was an age of growth and prosperity for many, mechanisation and advances in technology also brought great hardship, and from the mid-1840s the conditions for many working-class people deteriorated. Employers began to employ women and girls to carry out work that had traditionally been undertaken by men, and men and women were forced to work for less or be unemployed. A journeyman tailor speaking to Thomas Mayhew, the great chronicler of life in mid-nineteenth century London, noted:

“Before the year 1844 I could live comfortably, and keep my wife and children (I had five in my family) by my own labour. My wife then attended to her domestic and family duties; but since that time owing to the reduction in prices, she has been compelled to resort to her needle, as well as myself, for her living. My wife’s earnings are, upon an average, 8s per week. She makes dresses. I never would teach her to make waistcoats, because I knew the introduction of female hands had been the ruin of my trade. With the labour of myself and wife now I can only earn 32s a week, and six years ago I could make 36s. If I had a daughter I should be obliged to make her work as well, and then probably, with the labour of the three of us, we could make up at the week’s end as much money, as, up to 1844, I could get by my own single hands.”

This account is born out by the fact that Eleanor had also taken up her needle to help supplement the family’s income. By doing so, George and Eleanor managed to make ends meet, but life was difficult and in March 1851 the family was sharing what was most likely a modest terraced house at 1 James’ Place in Stratford with another family. Ten years later when the 1861 census was taken on 7 April, Eleanor was described as a ‘tailor’s widow’. George’s death has not been traced and he departs this history, at least in terms of the documentary evidence, as discreetly as he entered it.