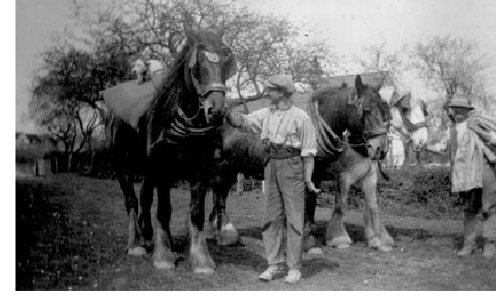 Today, the countryside represents a kind of Arcadian idyll, conjuring up images of quaint villages with thatched cottages and tea rooms. But life for the agricultural worker in nineteenth century England was far from idyllic; it was a hard existence of manual labour from dawn until dusk. Apart from the advancements of the agricultural revolution which saw the beginnings of mechanised farming, life had changed very little in rural England for centuries. It was a society of strict hierarchy where everyone knew his place: ‘The rich man in his castle, the poor man at his gate, God made them high and lowly and ordered their estate.’ Such was the message preached from the pulpits of the Church of England. It was into this world that Charles Monger was born to William and Hannah Monger in around 1828, in Sherborne St John, a village to the north of Basingtoke.

Charles was born in 1828 to the west of the Hampshire village of Sherborne St John, the son of William and Hannah Monger. A few weeks after his birth, on 28 July 1828, he was baptised at the Church of St Andrew where is father had been baptised and married. His childhood was spent supplementing his family’s income by carrying out jobs around the farms on which his 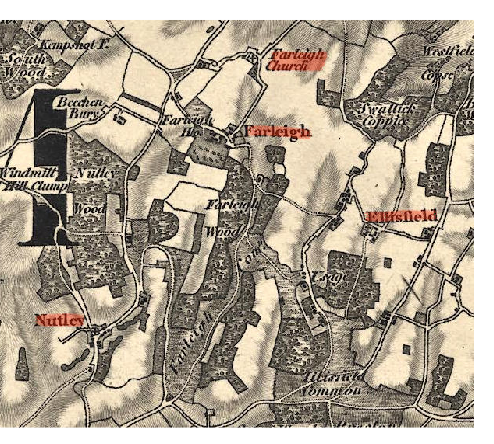 parents worked: scaring crows from the crops, collecting acorns to sell to farmers for their pigs, weeding and stone picking. By his teens, he was employed at a local farm as an apprentice carter, a step up from the lowly agricultural labourer. Apprenticeships traditionally lasted for seven years and by 1861 he was working as a carter at Farleigh Farm (or Manor Farm as it was also called) near Farleigh Wallop, four miles south of Sherborne. Farleigh Wallop formed part of the estate of the Earl of Portsmouth; the land was divided into two farms: Park Farm, to the east of the village and run by a tenant farmer called William Alexander Box, and Manor Farm run by William and Robert Brown. Manor Farm lay to the west of Farleigh Wallop and consisted of 560 acres (just under a a square mile). In 1861, it was run by 53-year old Robert Brown from Lincolnshire, who was living there with his wife, Sarah, 18 years his junior and their six young children.

As a carter, Charles probably had four horses to work and care for. His day started at five in the morning with feeding, watering and mucking out. Once this was done, it was time for breakfast and awaiting the orders for the day’s work. Only then could he harness the horses to start work at 7 o’clock. Work continued until 4 o’clock, at which time Charles took the horses back to the stables for a drink and a feed of corn before cleaning the mud off of them, grooming their coats and preparing their beds. By 5 o’clock he could return home for tea and some rest. But even then his day was not finished and he was back to the stable at 7 o’clock to give the horses another feed, hay for the night, and prepare their nosebags of corn for the next day. For Charles and the other carters, the working day finished at 8 o’clock. This was the routine every day of the year, except for the summer months, when the horses were turned out to grass for the night at 5 o’clock.

Charles Monger was one of a number of outdoor servants working at the farm. Also employed were a more experienced carter who was fifty years old, three carter’s boys ranging from age thirteen to twenty-one, and a number of agricultural labourers. Indoors, there were five servants: a governess, a cook, a nursemaid, a nurse, and a housemaid called Mary Ann Benham.

Mary Ann had been born in the village of Nutley, 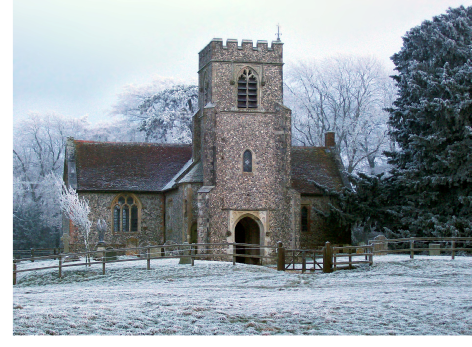 only a few miles from Manor Farm, in 1844. By the time her father remarried in 1859, she was probably working at Manor Farm. It was here that Charles met Mary Ann; . Their courtship was carried out under the watchful eyes of the other servants, and no doubt their was some good-humoured gossip and teasing before Charles and Mary Ann announced they were to be married. On Saturday, 18 October 1862, Charles and Mary Ann put on their ‘Sunday best’ and walked down the lane past Farleigh House and Park Farm to the field where the picturesque Church of St Andrew still stands (pictured right). The wedding was a modest affair attended by the other servants. Bride, groom and witnesses all made their mark with a cross (the marriage entry is shown below).

After their marriage, Charles continued to work at Manor Farm, although he and Mary Ann moved to a farm worker’s cottage in Ellisfield, a hamlet a mile or so away by an undulating narrow track. Their first child, Arthur, was born on 9 October 1864 so Mary Ann may have continued working at Manor Farm until the time her son was born.

After Arthur’s arrival, Charles and his family moved to Sherborne St John, possibly to be closer to Charles’ family and the network of support it provided. It was here that five more children were born: William (November 1866), Frank (late 1868), Albert (July 1871), Sidney (1873) and Rosalind Kate (June 1875). In all, Charles and Mary Ann had eleven children, seven of whom survived to adulthood.

The changing face of the country

The closing decades of the nineteenth century were some of the most difficult for the agricultural worker and there was a steady decline in the number of people employed on the land. In 1851 one in five of the total workforce had been employed as farm workers; by 1901 this figure had dropped to one in eleven. A series of poor harvests in the 1870s and better transport resulted in cheap corn flooding in from America, driving the price of wheat down and, subsequently, reducing the wages of agricultural labourers. This slump continued until the end of the century. Perhaps it was these circumstances and the need to find work that prompted the family to travel to Odiham between the summer of 1875 and the spring of 1877.

Odiham was a small market town which held its market every Tuesday. Twice a year there were fairs for horses, cattle and other livestock, and in early July the Odiham races were held on a neighbouring heath. It must have seemed a far cry from Farleigh with its 112 inhabitants (1859). To obtain a new position, Charles may have attended the local hiring fair on Candlemas Day (14 February in the old calendar), the traditional date on which all contracts ended and new hirings took place. Thomas Hardy describes a typical hiring fair in his novel of 1874, ‘Far From the Madding Crowd’:

‘At one end of the street stood two to three hundred blithe and hearty labourers waiting upon Chance — all men of the stamp to whom labour suggests nothing worse than a wrestle with gravitation, and pleasure nothing better than a renunciation of the same. Among these, carters and waggoners were distinguished by having a piece of whip-cord twisted round their hats ... and thus the situation required was known to the hirers at a glance . . . "

Charles found employment as a farm worker, settling at Pot Bridge, a small hamlet just outside Odiham. It was here that his son George was born on 3 May 1877. David followed two years later in early 1879 and Jane two years after that in early 1881 when Charles was about 48 years old. 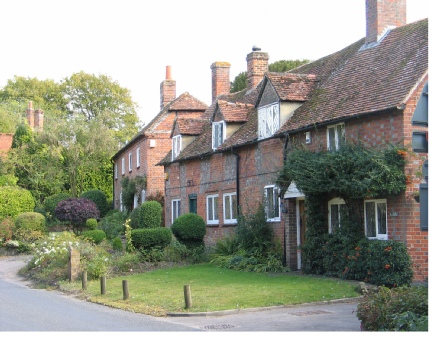 By 1891, Charles, Mary Ann and their four sons (William, Frank, George and David) were living in a four-room cottage at Wootton St Lawrence, a tiny hamlet about a mile and half south-west of Sherborne St John (the map below shows the area in about 1840). During the next 10 years Charles and Mary Ann remained in the area, although most of their children moved away in search of a new life: William to Windsor where he worked as a yardman on a farm, Albert to Chelsea, Sidney and Arthur to Woking, and David to Battersea.

By 1901 Charles and Mary Ann had moved to Oak Tree Cottage in Sherborne St John, less than a mile from where Charles had been born. The cottage may not have been dissimilar to those pictured on the left which still stand in Sherborne St John. To supplement the money that Charles earned as a labourer, Mary Ann took in washing and they had a lodger, Frederick Shepherd, a 23-year old game keeper from Sussex. 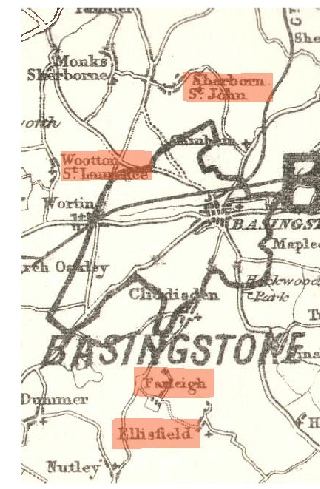 The 1891 census shows their six year-old granddaughter, Rose, staying with them.

Having journeyed full circle, but never travelling further than about six miles from where he was born, Charles died on 16 May 1902 aged 68. Presumably he had been in good health and died suddenly, as an inquest was held the day after his death; it found the cause of death was ’natural — heart disease’. During his lifetime, which spanned the reign of Queen Victoria, Charles witnessed momentous change. He was born into a rural landscape where heavy machinery had not yet been introduced, where the primary mode of transport was foot or horse, and the fastest a man could travel was on a horse at full gallop; yet by the end of his life the peace and quiet of the Hampshire lanes was broken by the occasional noise of a motor car, and machinery had taken over much of the farm work that had been done by hand previously.