Henry Joseph, or ‘Harry’ as he 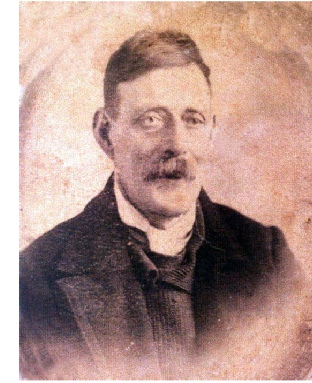 was known, was born on 2 February 1870 in Childs Hill, the son of Joseph and Anne Elizabeth Collins. With four daughters already at home, his parents were delighted at the safe delivery of their son.

Childs Hill and Hendon were in a state of transition when Harry was born. The railway had arrived in 1867 and the first passenger services were running by October 1868 with nine trains a day to Moorgate Street. This opening of communications to the heart of London had  an immediate effect on Hendon and there was immense growth in house building. The opening of a railway station in May 1870 near The Welsh Harp, a reservoir which became a pleasure resort from the 1860s, meant that Londoners flocked there to enjoy the leisure pursuits on offer, including a wide range of sporting activities. Even in the 1890s, however, surrounding areas such as Childs Hill, Temple Fortune and Church End were only just beginning to run into one another and it was still possible to walk between the villages along footpaths which ran at least partly through fields.

After a rudimentary education at one of the many National Schools that had sprung up in the area (the photograph below shows Vine Cottage, the old Dame School at Childs Hill which was replaced by a National School in 1856), Harry left home to earn his living. With improvements in  transport links, by 1889 he was living at 8 Piercefield Street on the borders of Kentish Town and Hampstead Heath. A working class area, Charles Booth, in his survey of L 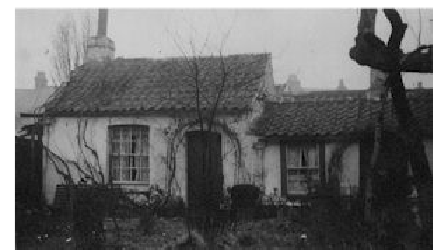 ondon poverty, described it as ‘rather rough and working class’ but commented that the children were ‘well clad and shod’ and whilst some families were poor, others were comfortable. Harry was working as a carman (that is, he transported goods with a horse and cart).

About this time he met Sarah Ann Rogers, a seventeen year old girl who had been born in Barrow-in-Furness in Lancashire but who had travelled widely throughout the country with her family. They were married on Monday, 23 December 1889 at the Registrar’s Office in St Pancras (the marriage entry is shown below). Harry gave his age as twenty-two although he was nineteen; Sarah professed to be twenty-one. It does not appear that any family members were present and, as Sarah was six months pregnant, there was no time for the marriage to be refused due to a lack of parental consent with them both being minors. A few months later in the Spring of 1890, Harry and Sarah’s first child, Emily, was born in Kentish Town; she would be the first of many.

A butcher, a baker, a candlestick maker

The following year, Harry and his family returned to Childs Hill where they were living in one room at 4 High Street, a four-roomed house above a shop. Living with Joseph, Sarah and the one-year old Emily were Ann Rogers, Sarah’s widowed mother, and John Rogers, Sarah’s brother. Sarah was five months pregnant. Another room in the house was let to a family of seven which included a laundress, a hairdresser, a violinist and a grocer. The remaining two rooms were rented by a widow from St James’ who earned her living ironing.

Four months after these facts were recorded in the 1891 census, Harry’s first son, Henry Joseph, was born, adding to the cramped living conditions. By this time, Harry was working as a brickfield labourer. Sarah’s father and brother were brick makers and Childs Hill had been a centre of brick and tile manufacturing since the eighteenth century, so it is not surprising that he took up this trade.

Over the next few years, the family moved regularly from one set of rented rooms to another. The first move, in about 1893, was a few miles east to Stamford Hill where Alice Emily was born in April. Two years later the family packed up and crossed the River Thames to Lewisham. 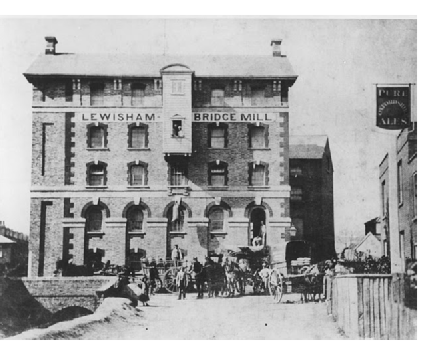 Harry’s parents and grandparents had lived in the Highgate area for more than sixty years, so this move south was a significant change. The most likely reason for the family’s move was to escape their debtors, and it was probably one of their many ‘moonlight flits’ to escape their landlord and make a fresh start. That they moved such a distance may indicate that their rent arrears were equally significant.

A map of 1894 reveals what a change Lewisham must have been from Childs Hill, with its densely populated rows of terraced housing. Joseph’s son, John, was the first child to be born in Lewisham. Edmund followed in August 1896 whilst the family were living at 72 Mill Road which ran alongside Lewisham Bridge Mill, a corn mill (shown in the photograp on the left).

Over the next fifteen years, there were regular moves and a succession of children including Catherine (Kit) (1898), Richard (1899), and Thomas (1901), by which time the family were living at 22 Porson Street. It was a small two-storey house next to the railway line (a ‘two-up, two-down’) but at least they were able to rent the entire house. Life continued much as before: children and r

elocation, the family hiring a cart from a local trader and loading up their possessions, including Sarah and Harry’s feather mattress, the older children looking after the younger ones and making sure no one was left behind. It is no wonder that most working class families moved no more than a mile or so.

Two more daughters, Ruth Violet (1904) and Elizabeth Louisa (1905) followed. They were baptised on 15 February 1905 at the Church of St John the Evangelist in Blackheath (pictured right) whilst the family were living at 6 Alfred Terrace. Next, the family moved to 30 Derwent Street, a couple of hundred yards from the Port of London Wharf and a quarter of a mile from Greenwich Park with its famous observatory and meridian line. Although there was little opportunity for leisure, there was time for a Sunday stroll in the park. In his spare time, Harry made toys for his children and his grandson, Bert Monger, later recalled a wooden toy horse with wheels that Harry made for him.

It was whilst Harry and his family were living in Derwent Street that on 27 February 1906 Sarah gave birth to what was at least her eleventh child: a daughter whom her parents named Florence Ada. She was baptised on 15 March 1906 at Christ Church, Greenwich. James followed in 1908 and Ivy in 1910, so that by the 1911 census, Sarah declared that she had given birth to thirteen children; only Richard and John had died, leaving eleven surviving children. On the night of the census, all eleven children were listed as living in the five-roomed house at 4 Rennell Street in Lewisham.

Three of the streets in which Harry lived over the years: Porson Street, Mill Road and Rennel Street. 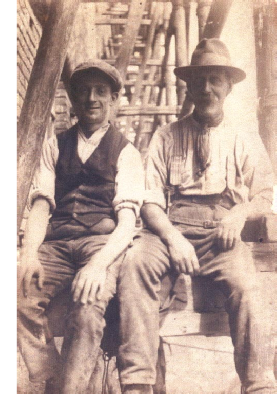 By 1927 Harry and his family had moved across London to 75 Livingstone Road, just three streets from Clapham Junction railway station. In the days of coal and steam, it was a polluted and noisy location. By now, Harry was 57 years old, although this photograph of him with one of his sons taken about this with one of his sons shows him looking older; thirteen children and a life of manual labour had taken its toll, although unlike many men (and women) of his background, he did not drink and was described as a lovely, kind man; perhaps the spirit of his Collins’ Quaker ancestors ran in his veins.

With 30 years’ building experience, he had progressed to working as a foreman and in November 1927 he was working at Caseley Road in Balham. In the 1920s, scaffolding consisted of poles sunk into barrels of sand fastened together with wire. Whilst on the job, Harry attempted to move some scaffolding himself. He suffered an internal rupture and died on site. His body was taken home to Livingstone Road. The cause of death was given as ‘toxalymia, intestinal contraction (incisional hernia)’.