Frances (‘Fanny’) Dunford was born near Overton in Hampshire in about 1813 to Stephen and Ann Dunford. She spent her childhood and early adult life in the area, probably not venturing more than a few miles from the town, near which her father worked as an agricultural labourer. O 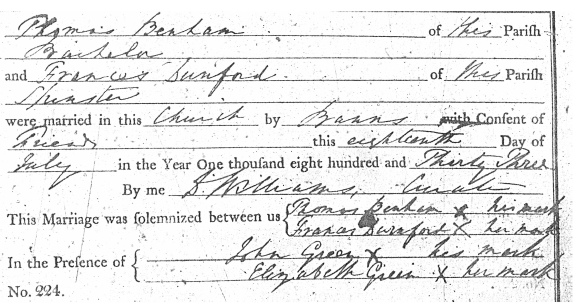 n Thursday 18 July 1833, after their banns had been read at the Church of St Mary at Overton for three successive Sundays, Fanny married Thomas Benham. Fanny’s sister and brother-in-law, Elizabeth and John Green, joined them and acted as their witnesses, although all of the wedding party made their mark (the entry in the marriage register is shown below).

A year late on 17 August 1834, Fanny gave birth to a son who was named after Fanny’s father, Stephen. Another son, William, this time named after Thomas’ father, followed a few years later in the Spring of 1838. Both infants were baptised at the Church of St Mary where Fanny and Thomas had married.

In search of work

Only a couple of years after William’s birth, Fanny and Thomas were living at Brockhurst near Gosport. From the late 1830s, railways started to spring up all over the country, and one of the first to be built in Hampshire ran from Bishopstoke to Gosport. It was authorised in 1839 and during 1840, perhaps during the winter months when agricultural labourers were in less demand, Thomas and Fanny travelled south to work as labourers on the railways. It may have been the first time that Fanny had travelled such a distance. Not only that, Fanny had left her son, Stephen, with Thomas’ parents in Overton; William must have been left with another relative but has not been traced. By November 1841, when the railway was opened, Thomas and Fanny had returned to Overton. From here, they moved to Nutley, a few miles to the south, where their daughter, Mary Ann, was born on 22 January 1844. By 1851, they had moved again, this time to Preston Candover where Thomas had been born. Sharing the house with Thomas and Fanny were their three children, Fanny’s elderly uncle, Thomas Brown, who had been born in Andover, and a 22-year old lodger from Nutley called Daniel Goodyear. 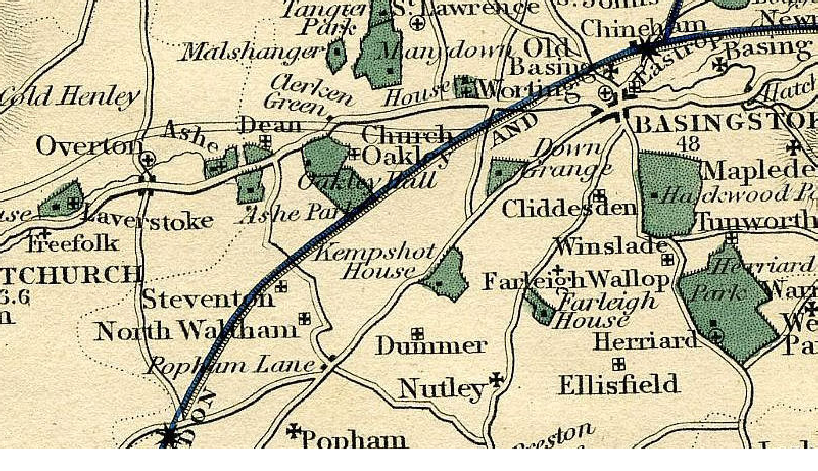 Three years later in 1854 Thomas was working at White Hill Farm. White Hill runs from Kingsclere in the north, descending steeply to Overton in the south; at its crown it provides spectacular views of the valley below, but is exposed to the elements. In the Summer of 1853 Fanny gave birth to another daughter, Eliza. Not long after Eliza’s birth, Fanny’s persistent cough became worse and she started coughing up blood. In the mid-nineteenth century consumption killed one in five adults and Fanny would have recognised the symptoms. Fanny died on 16 February 1854 at White Hill Farm; she may have been living in a worker’s cottage with her family.

On a cold February day, f

our days after her death, the cycle of Fanny’s life completed its short journey as Thomas, leading a small gathering of family and friends, made his way down White Hill to the Churchyard of St Mary’s Church at Overton (shown on the right), the church where Fanny and Thomas had been married, where at least two of her children had been baptised, and where herself had probably been baptised only forty years earlier.