Little is known of 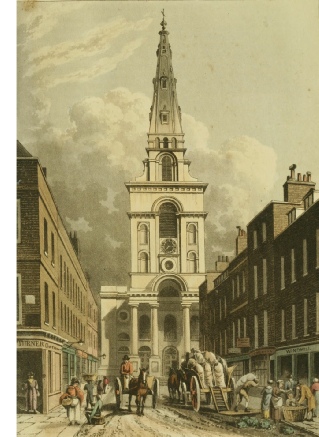 Charles Steward’s life. He was born about 1782 and may have been baptised at St Bride’s Church in Fleet Street, the son of Charles and Ann Steward, although there is only circumstantial evidence to suggest this.

In 1810 Charles was living in Spitalfields where he was working as a carpenter. Spitalfields (the name is a contraction of ‘Hospital Fields’ from the priory hospital that existed on the site from 1197 to 1539) was outside the bounds of the City of London and from the late seventeenth century the area started to be settled by Huguenots, protestants escaping religious persecution in France. Many were silk weavers and by setting outside the bounds of the City, they hoped to avoid the restrictive legislation of the City Guilds. In 1700 nearly all the inhabitants of Spitalfields were French and Londoners complained that it was difficult to hear English spoken in the streets. During the eighteenth century, Spitalfields grew rapidly and well-appointed terraced houses were built for master weavers, as well as more modest homes for workers. The other significant development was the building of Christ Church, that great Hawksmoor church that lies at the heart of Spitalfields. It was built between 1714 and 1729 as an act of Anglican supremacy and as a direct challenge to the Huguenot churches which, although Protestant, owed no allegiance to the Church of England and thus to the King.

Around about 1810, Charles met Mary Ducro, a local silk weaver of French Huguenot descent. On Monday 3 September 1810, they walked down Quaker Street to Brick Lane and then along Church Street (now Fournier Street), a 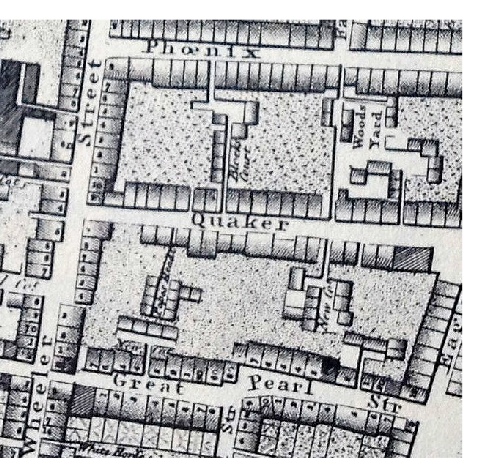 rriving at the junction with the busy thoroughfare, aptly named Commercial Street. From here they stepped into the tranquillity of Christ Church where they were married. Both bride and groom signed their own name. The engraving from 1815 shows the church viewed from Union Street (now Brushfield Street).

Charles and Mary gave their place of residence as Quaker Street, although from other church records their residence was more precisely Crown Court. This was one of the many courtyards lying behind the facade of houses offering cheaper accommodation; a directory of 1810 describes it location as on the left about nine doors up from number 29 Wheeler Street and leading to Black’s court and Phoenix Street. The map of 1799 shows its location. A Parliamentary report on sanitation of 1844 named it it as one of the many ‘courts within courts’ ‘where flags the noon-tide air, and as we pass we fear to breathe the putrefying mass’, although conditions were nowhere near as bad in 1810.

Just over a year after Charles married Mary, Charles and Mary’s first child was born on 31 October 1811, a daughter whom they named Sarah Ann; she was baptised at Christ Church on 15 December. Five children followed at intervals of about two years: Mary Ann (July 1813), Charles (March 1815), Ann Martha (January 1817), 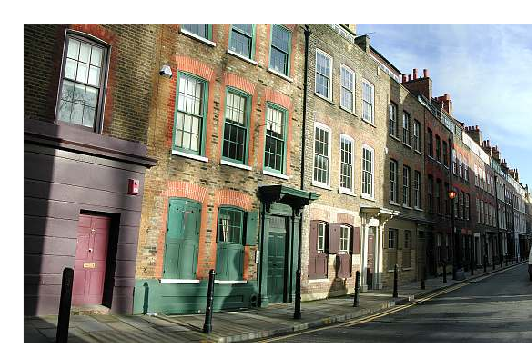 Eliza (May 1819), and Esther (March 1821). During this period, the family continued to live in Crown Court and Charles worked as a carpenter. London was booming and there was plenty of work around. There is little to indicate the family’s financial circumstances other than that all of Charles and Mary’s children were able to read and write, no doubt a legacy of Mary’s Huguenot upbringing, which encouraged education not only of boys but also of girls. Unlike many families, all of their children, apart from possibly Charles, had survived infancy. However, on 10 February 1823, the registers of Christ Church record the burial of twin infant boys: William and Thomas Steward, aged one month. These were almost certainly the children of Charles and Mary. If so, the family were living in Fashion Street at the time, which ran parallel to Fournier Street, close to Christ Church. Today, little remains of eighteenth century Fashion Street, but Fournier Street, pictured above, shows what it would have looked like at the time Charles and his family were living there.

In early February 1824, only a year after the death of his infant sons, Charles died. He was buried in the churchyard of Christ Church on 15 February. The cause of his death is not known.