William Worcester Reynolds was born on 3 August 1812 in Dartford, 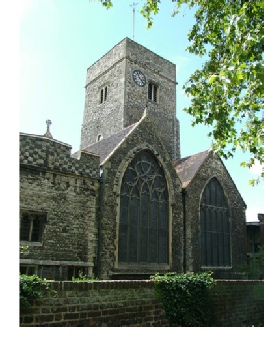 Kent to William and Mary Reynolds. He was baptised a few weeks later on 28 August 1812 at the Church of the Holy Trinity  (pictured right). His family were agricultural labourers and there were already two siblings at home when he was born: Mary Ann (1806) and Elizabeth (born about 1809). Other siblings followed including probably Matilda (1815), Henry (1817), Charles, and Eliza (1824).

At the time of his birth, Dartford (shown in the illustration below) was a market town of about 2,500 people. It was principally an agricultural community dependent on its markets for prosperity and economic success, and its economic base had altered little since the 1500s other than the introduction of a number of industries including paper-making, brewing, the manufacture of gunpowder, iron-slitting, smelting and textile. Although street lighting had been introduced as early as the 1770s, large areas of eighteenth century Dartford were characterised by poor housing, lack of proper sanitation and a general air of squalor. For the first 30 years or so of his life, William remained in Dartford and the surrounding areas, working from a young age as a labourer. 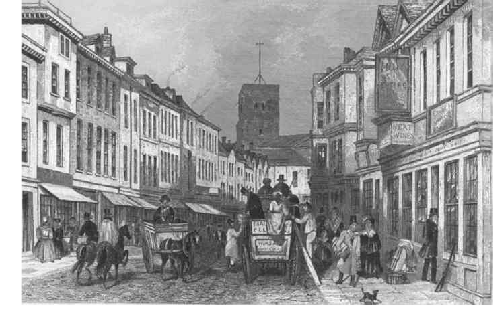 In 1839 William was in Erith, a few miles west of Dartford. Erith was a small riverside port and a popular anchorage. It was given prominence by Henry VIII's decision to open a naval dockyard in the town and ships often discharged cargo there before proceeding through the shallows upstream. Nonetheless, in 1831 Erith's population was only 1,533, and it was described as being ‘composed chiefly of two streets, one leading down to the water side, the other branching off to the left towards the church’. It was at this ancient Church of St John the Baptist, half covered with ivy where sheep grazed in the churchyard, that William married Mercy Cunningham on 6 October 1839. The engravings below shows two views of the church from about this time. Mercy Cunningham was the daughter of a labourer by the name of William. She was born in about 1817 in Wilmington, Kent, a small village about a mile and a half south of Dartford known f 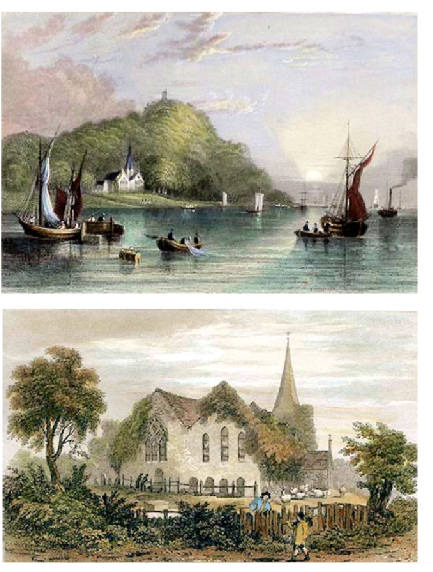 or its cherry orchards and gardens. In 1851, its population was only 951 souls.

William and Mercy did not remain in Erith long and their residence may have been long enough only to get married. On 26 January 1840 they had returned to Dartford to baptise their son, whom they named William after his father. Perhaps Mercy, five-months pregnant at the time of her wedding, had married in Erith to escape gossiping tongues, or had remained in Erith only until she was Mrs Reynolds before returning with her new husband to her family in Dartford.

In 1841 they were living at Waterside which ran alongside the River Darent. An exposed spot, particularly when a south-westerly wind below, their exact residence was probably Webbs Alley, one of the many courtyards and alleyways branching off the High Street (shown below in an engraving from about 1830) and Waterside. Close by were a number of other Cunninghams: a William Cunningham and his wife Elizabeth, both of whom had been born at Sutton-at-Hone around 1810, and a William and Mary Cunningham, aged about 60, living with their son, George, who had been born about 1811; these were probably Mercy’s parents and brothers.

It was while living at Webbs Alley that the two-year old William died on 14 March 1842. He had contracted whooping cough, a high infectious disease which is characterised by a severe respiratory ‘whooping’ sound. They buried him on 20 March 1842 at the Church of the Holy Trinity. The following year on 11 March 1843, whilst the family were still living at Waterside, a daughter, Emma, was born.

Sometime between 1843 and 1846 William and his family moved to London. Perhaps they travelled up river by boat, for they settled in St Saviour, Southwark on the south bank of the River Thames. A son, John, was born on St Valentine’s Day 1846 and baptised at the Church of St John near Waterloo station. Another son, Charles, followed in August 1850, about the time that John died. 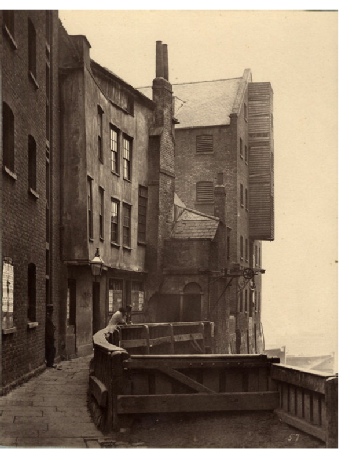 By the time the 1851 census was taken, William and his family had moved to 14 Townsend Yard near Union Street, one of the many alleys and yards packed between the main thoroughfares. From here, they moved to nearby Rappell Place, where Eliza was born on 10 July 1853. She and Charles were baptised at the Church of St Saviour in 1853. Another daughter, Elizabeth Matilda, followed in January 1859.

By 1861, the family (now consisting of William and Mercy and their five children) moved to 5 Princes Buildings, near Bankside where William worked as a dock labourer whenever he could get work;  The photograph on the left shows St Mary Overie docks in Southwark in the late nineteenth century.

Whilst the docks employed a small number of men permanently, the docks operated almost solely on casual labour, the need for which varied greatly from day to day. As it was also the one occupation for which a man needed no more skill than brute force and the ability to move ‘heavy bodies from one place to another’, in the words of Henry Mayhew that great observer of Victorian life, the docks attracted men from every walk of life. It was back-breaking, precarious work, continually exposed to the elements; the south bank of the Thames is particularly exposed to the wind. Even so, the supply of men far outstripped the work available and men assembled twice a day in the hope of work. In 1861, Mayhew witnessed the process: 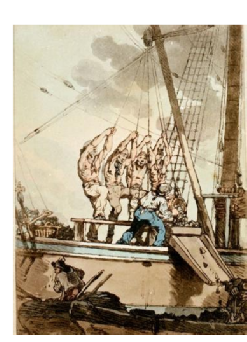 “Presently you know, by the stream pouring through the gates and the rush towards particular spots, that the ‘calling foremen’ have made their appearance. Then begins the scuffling and scrambling forth of countless hands high in the air, to catch the eye of him whose voice may give them work. As the foreman calls from a book the names, some men jump on the backs of others, so as to lift themselves high above the rest, and attract the notice of him who hires them. All are shouting. Some cry aloud his surname, some his Christian name, others call out their own names, to remind him that they are there… Indeed, it is a sight to sadden the most callous, to see thousands of men struggling for only one day's hire, the scuffle being made the fiercer by the knowledge that hundreds out of the number there assembled must be left to idle the day out in want”.

And for what? The reward of a pitiful 2s 6d a day, or 4d an hour for those taken on in the afternoon call. It was a precarious existence, particularly for a couple with a growing family. The winter of 1860/1 was particularly difficult and as a result, there was a lack of casual work in the docks.

From Princes Buildings, William and his family moved to 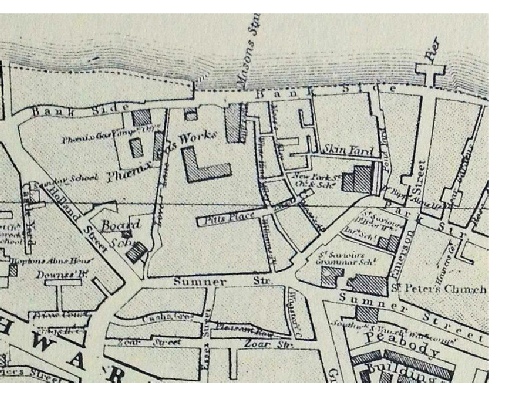 Pitt’s Place, a small courtyard situated where the Tate Modern now stands, the Phoenix Gas Works to the north and a skin yard (tanners) to the north east. It is shown at the centre of the map below. In November 1864, Mercy died of puerperal fever, following a pregnancy. It is likely that William died a few years later in 1869.

Following William’s death, Emma (who had married in 1863) cared for her younger sisters, Eliza and Elizabeth, and on 5 March 1871, Elizabeth Matilda was baptised at the Church of St John, Waterloo, at the same time as her nieces, Sarah Ann and Rachel Mercy Cawte; she was 12 years old and living at 32 Cornwall Place with Emma. The names of William and Mercy were entered into the baptism register posthumously, William Reynolds being given his full name - William Worcester Reynolds - possibly for the first time since his baptism in 1812 (see baptism register entries below). 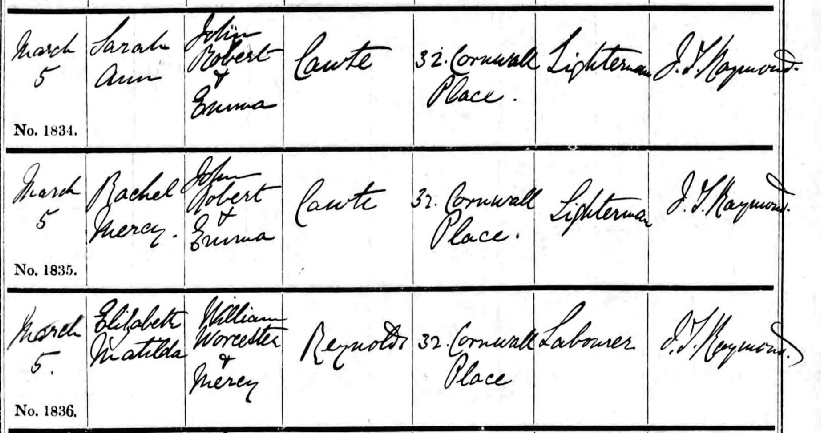